Just as San Jose State students and faculty have returned to classes — mostly virtually — the coronavirus has thrown a wrench in the school’s plans to build a stronger relationship with the downtown community surrounding its campus.

Because of state guidance on the pandemic, SJSU has been forced to close its campus to the public, meaning you aren’t allowed to even take a morning stroll across the grounds if you don’t have a university ID. School officials say this isn’t something they wanted to do, but the California State University system has interpreted the guidance to limit nonessential visitors to mean that campuses are off-limits.

And anyone who doesn’t take the hint could be cited for trespassing. Suddenly, bringing a lunch to eat on Tower Lawn doesn’t seem like such a great idea.

Ironically, San Jose State’s hand is being forced just as it launches a new campaign, “SJSU Loves SJ” — the latest part of an effort to seamlessly integrate the university campus within the greater downtown.

Since she arrived in 2016, President Mary Papazian has been working hard on improv-

ing the relationship between SJSU, the city and the communities around the university.

San Jose City Hall and the Civic Auditorium were both lit up in San Jose State’s blue- and- gold colors Friday night as a “ welcome back” from the city. It was a great plan until the coronavirus pandemic got in the way of a perfectly good relationship.

It’s unlikely that someone cutting through campus will be hassled by university police, but because the goal is to keep people who have to be on campus safe from the coronavirus, it makes sense to not linger when you don’t need to.

And one day, when the pandemic has passed, San Jose State will welcome back its neighbors with open arms, and we’ll do our best to forget the campus’ invisible gates were ever shut.

SCHOLARSHIP PROGRAM HITS 30 >> It was with a mixture of pride and disappointment that Rigo Chacon — the retired South Bay newsman — emailed to let me know that Abrazos & Books, the scholarship program he founded, was celebrating its 30th anniversary this fall. The pride was for achieving such a milestone, and the disappointment was because the pandemic means there will be no big celebration.

“I can’t even host an awards dinner for this year’s scholarship recipients,” Chacon said. “COVID- 19 wins another one and breaks my heart in the process.”

He covered the rebuilding of schools in Mexico City and was inspired to provide support for college- bound Santa Clara County students of all ethnicities.

The deadline for applications for this year’s scholarship is Sept. 30 (extended from an original July deadline).

Students can get more details and apply at abrazosandbooks.org.

YWCA SILICON VALLEY ANNOUNCES SPEAKER >> Former national security adviser Susan Rice, who also served as U. N. ambassador and reportedly was on Joe Biden’s short list for vice president, will be the keynote speaker at the YWCA of Silicon Valley’s 30th annual Inspire Luncheon on Oct. 29.

While this fundraising event normally packs more than 1,000 people into the Santa Clara Convention Center, public health orders have pushed it online. You can register to watch the live- stream for free, but a donation is expected. Get more details at ywca- sv.org.

It was a great success, prompting plans for a second exhibition this year. By now, you can guess that the virus changed those plans and the show has gone online.

The show is on display through Aug. 30, and a one-hour talk with four of the artists will take place at 1 p.m. today. Get more information at diasporainbloom.com.

GOLF TRIBUTE FOR A CARING MOM >> Greta Fitzgerald says her mom, Gayle Newgren, a longtime Almaden Valley resident who died in July 2019 at age 66, loved golf, giving back and celebrating with people.

So to honor her memory, Fitzgerald and her brother, Tyler Newgren, have organized the Gayle Newgren Charity Golf Tournament on Sept. 2 at Cinnabar Hills Golf Club.

Proceeds from the tournament will benefit the American Cancer Society, which Gayle Newgren supported through her work with the Grandview League.

You can get more details or sign up for the tournament before Thursday’s registration deadline at golf4gayle.com.

“She told us on her last days she wanted us to enjoy life. I feel like that’s what this golf event is about, not just for us but for everyone that’s lost someone to cancer or is in the process of fighting it,” Fitzgerald said. “And I’m gonna lose some of her golf balls on her favorite course so it’s as if she is still there playing.” Contact Sal Pizarro at spizarro@ bayareanewsgroup. com. 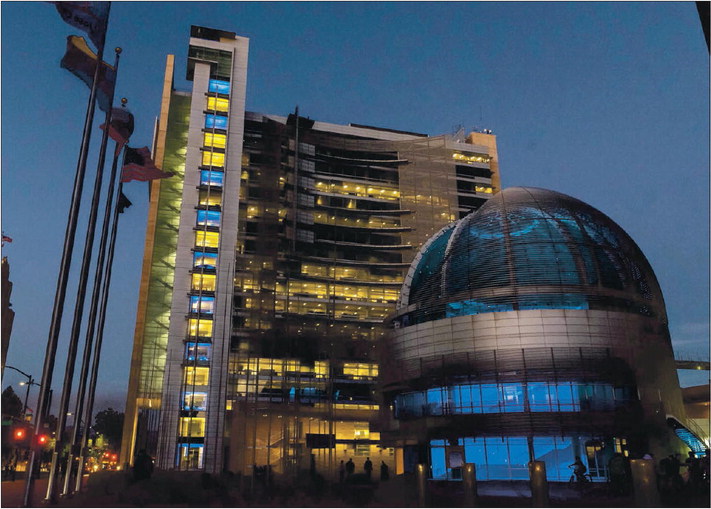 San Jose City Hall’s rotunda and tower stairwell are illuminated in San Jose State’s colors of blue and gold Friday evening as a “welcome back” from the city.

Click here to see this page in the eEdition: